Final preparation was under way last week for Alps Ecoscience’ anaerobic digestion pilot plant to move to a new project in Southern England. For the past 12 months this innovative pilot scale anaerobic digestion plant has been in Northern Ireland.  Contributing to the design of new waste to energy solutions for RiverRidge Recycling, one of the UK’s most innovation waste management companies.

The fully containerised pilot plant has enabled end to end testing of the anaerobic digestion (AD) using feedstocks coming directly from current domestic waste streams. It has proven the case for AD and served as an innovation lab. Contributing to the design and configuration of future production scale waste management facilities. 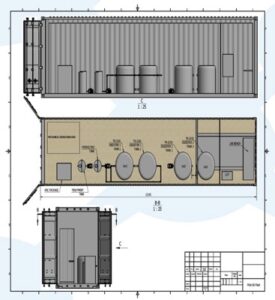 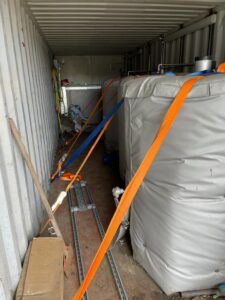 The technical drawing of the pilot AD plant and the real thing stripped out and strapped down ready to be transported to England.

Alps Ecoscience’s pilot plant was originally designed as a pre-production prototype. Enabling different process configurations to be tested and their outputs measured. Every metric is monitored just like in full scale biogas production. The OLR, gas quality, flow rates and the final digestate quality are measured for every scenario. The resultant matrix has informed the brief for the design of the production scale plant. It has also driven sophisticated financial models to support the funding of the project and its return on investment.

In addition to the digesters the pilot plant has its own lab facility for testing and biological evaluation. It also features the same SCADA monitoring equipment and consoles found in biogas plants. The aim was to replicate everything found in full scale production, even down to the reporting software.

Since inception the scope of the pilot plant has been expanded to include feedstock pretreatment and hydrolysis. Mechanical, chemical and thermal protocols have all been tested. With manufacturers connecting new equipment directly to the pilot plant to give practical demonstrations to clients and for the pilot to measure the physical results. Given the capital cost of equipment this approach gives confidence to all stakeholders.

From the end of July 2021, Alps Ecoscience’ pilot plant will be supporting Ixora Energy in its ambition to innovate and optimise its biogas production. We’re pleased be involved in this partnership.

If you are interested in learning more about pilot plants or plant reactors please get in touch. We can share a narrated video tour of the facility.

Want to find out more?