This screen shot from a UK site shows how the gas output (the blue line) can be stabilised and made more predictable. This result was achieved by focusing on the type of feed stock and the rate at which the new material was added to the anaerobic digester. By testing and classifying new material, the volume and the timing of its addition to the AD reactor can be managed.

Alps Ecoscience’s research has identified the importance of managing Hydrolysis, the first and determining stage of Anaerobic Digestion. Managing Hydrolysis ensures new feed stocks do not adversely impact material at later stages of decomposition within the reactor by inhibiting stage transition and gas release by creating variance in temperature, pH and C/N level.

The screen shot above also shows the dramatic effect that equipment failure has on Biogas production. The gas production drops to zero when the output pump fails and the AD pilot reactor has to be offline. This later shot shows how the AD pilot plant recovers and gradually begins to return to a stable gas output curve. 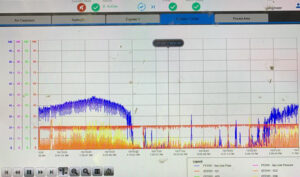 Once the feedstock loading is optimised the AD pilot plant monitoring dashboard can be used to further optimise biogas production. For certain feed stocks pretreatment can be very effective in accelerating breakdown and ensuring a smoother transition into the reactor. In some cases the addition of organic catalysts such as BOC to the substrate make the biomass more accessible to hydrolytic enzymes. This can be beneficial to increasing the organic loading rate (OLR) whilst lowering the Hydrologic Retention Time (HRT). Generally, resulting isn higher volumes of waste through the reactor, more gas and improved financial performance.

The beauty of Alps Ecoscience’s AD pilot plants is that they provide real time analysis of reactor performance at a manageable scale. This de-risks the design and commissioning of a new reactor or removes uncertainty when implementing process changes to an existing full scale biogas production facility.

Want to find out more?